It was the last weekly game in the club before x-mas and that should be something special!  So I carried my complete Italian Wars 28mm figures over and Me, Bart and Alisdair went for the historical Battle of Ceresole - but with a little bit more umpf (more guns and arquebusiers for the Imperials, more Horse for the French and more Swiss ...

This was the first time all of my new Swiss were coming out to play and so I decided to choose the French and conscripted Alisdair into my service and gave him the left flank and the Bande Neri (did I mentioned we umpfed it up a bit?). So Bart had to play the Imperials-Spanish his Highness Charles V. I had recently finished my second set of large hills, as we that would be the only dominating terrain feature. As with these games they are too big to finish for a club night, but you live only once, so we gave the "skirmishing" rabble a headstart and deployed them in the middle while the big guns, pike blocks and gendarmes were at the edges.

Each had 5 commands, including the king / emperor, and Bart won the initiative and started the advance. Basically you need to advance a lot before you even reach the enemy. My Swiss were crawling in snail speed and we had two blunder (Alisdair and Bart), but eventually we were in shooting range and the Spanish-imperials were peppering the French quite heavy.
Then I felt the need to charge with my Men-At-Arms two guns... also in this period not a good idea not a tin can reached the Germans.

Bart was advancing left right and centre and soon we had the usual cavalry fight on both flanks. I did quite well vs Bart, the title holder in the Club-Horse-Hussar and was fairly proud of me: until Alisdair charged Bart -  with his French Archers ... all through the game he swiped Barts Horse away, much to his chargrin. And I was so stupid to deny him, Alisdair, the French Gendarmes d‘Ordonnance!!! I just nearly lost all of them vs Barts Imperial ones. Next games Alisdair will get the Horse!!!

Then nearly to the ned we killed some units, mostly horse and guns, but at the last turn I made an all out charge and blasted Barts gendarmes away and nearly killed Barts mega Landsknechts pike block ... he just  messed up with the dice and had to re-roll and then just got away ... Any way final count was 1 unit more in the ditch from the Imperials, so technically a French victory, but Bart had the upper hand with the guns and still an operating unit of Gendarmes d‘ Ordonnance ... well if this would have been a Sunday game Me and Alisdair would have to work hard for the victory ... so you could argue and because its x-mas, it was a draw! But my new Swiss weren't defeated! (you know the curse of the new models...)

Well that was it all in all absolutely fun - next Sunday game will be the last in 2019 and a massive To The Strongest including my Classical Greeks ... 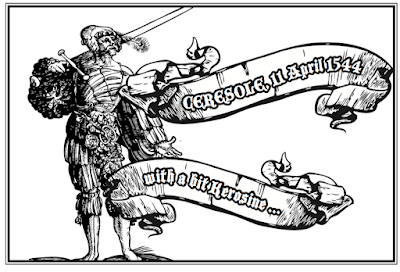