Well, it was about time, I would say, so I put my 28mm peasant horde plus some of my Italian wars Landsknechts out and, for good measure throw in some of the personalities of the conflict and set up a village raid scenario. Bart agreed to play the Peasants and Mike and Alisdair were defending the Swabian League. Also I needed a nice battle to introduce my new hills.

The mean Abbot of Flohlingen had pressed his flock a bit too much, to the point that they asked the "marauding peasant hordes" of Thomas Muentzer (who happened to be near) to free the village. Rumour spread that the abbot send help to the Swabian League and that they send their infamous "Bauernwuerger" (the peasant strangler), Count Georg v. Waldburg. So the peasant expected the League to make their way on the main road through the woods. Little did they know that "Joerg" the strangler was famous for his pronged attacks - also did he pay the famous robber knight Franz v. Sickingen enough to participate in the upcoming hunt. Little did they know though, that Thomas Muenzer, the rebellious priest, and his comrades had blackmailed the famous Goetz v. Berlichingen to join their fight. Just as the negotiations stalled the parties arrived from all four directions and the conflict ignited!

Bart had the first move and he attacked the defending monks of the church immediately and broke them, unfortunately the abbot got away and made arun for his life towards a Captain of the Reich and his Landsknecht pike blocks. Another tricky thing was that the church, now bar any defenders, was an opportunity too much for the mob and they started to burn and plunder. effectively not participating in the battle until a morale check was successful, but that had to be in a time frame (1d6 turns) or they would wander off with their spoils. Peasants would be drawn to the church and the league soldiers towards the village.

Not to be out done Mike charged (follow me order), with his men-at-arms through the woods, took some shots from the hunting farmers and clashed with a mob of peasants ... but rolled abysmal and they hacked the knights including Franz v. Sickingen of this earth.

Many more units came most of the time the league seemed to have difficulties to co-ordinate their attacks, but Bart played his peasants well took the hits but did not let them break and shushed his shaken farm boyz into the houses of the village, as cover against the light guns of the league.

Later he with drew and let the League soldier basically fell into the plunder trap. Out of their mind in plunder rage there was not much use for them, poor Georg, less peasants to strangle.

In the end, and the battle could have ended either way, I decided to declare a draw. In the first half Bart managed nearly to get all the goals in one turn! But the fat Abbot escaped! Then the league made many mistakes and blunder, could not get their footing right and only just later was inflicting some more damage. The peasants had the higher casualties (which is to be expected), but managed to burn the church to the ground and killed Franz v. Sickingen.

I would love to do this next time with some lion rampant of Pikemens lament derivates ... I enjoyed this massively and there will be more peasant slaughter to come. 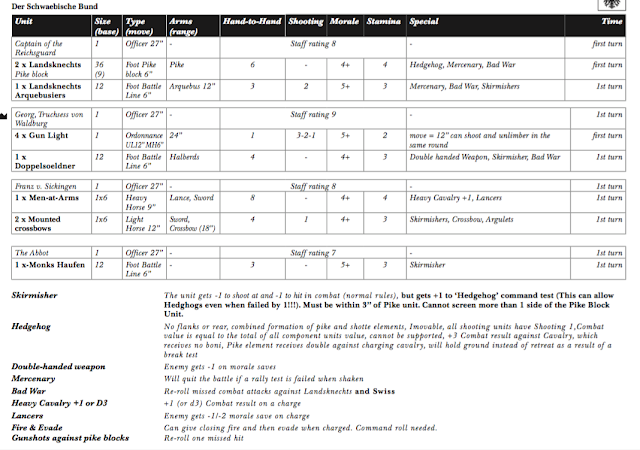 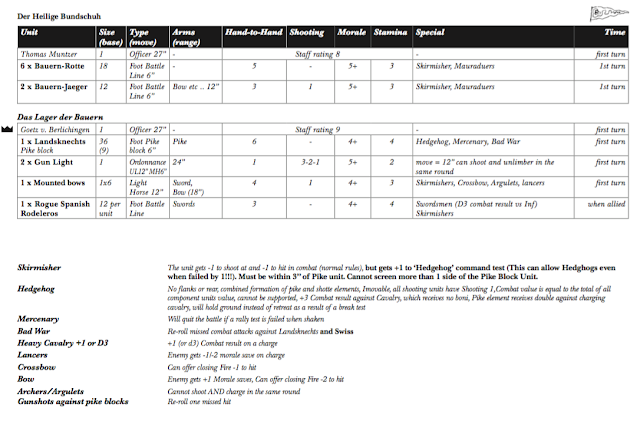 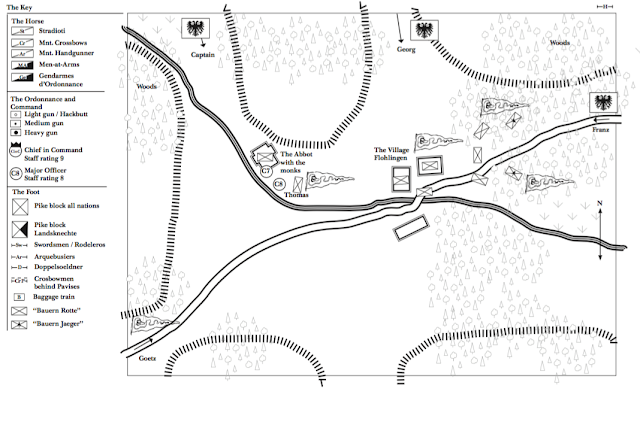