The Battle Of Amphipolis - 422BC (Hail Caesar)

What a better way to start the year with some of the same you ended it? - So I put my Spartans and Athenians (28mm Warlord games and Victrix mix) on the table and we were going for the ancient battle late in the Peloponnesian War around Amphipolis.

In short, in real history, Cleon, the Delian empire general, strutted his forces in front of the city walls (just invisible on the long hill at the table edge in our illustrous case), while Brasidas went in for the kill, and lost his life but won the battle for the Spartans. So Bart (spartans and the King's Body Guard) and me (allies and Helots) stepped in for the Peleponnesian League while Mike (the Delian elite and allied hoplites) and Alisdair (the Thessalonian Riders and other rabble and peltasts) fought for Athens and his Delian Empire.

The Athenians were quite advanced as the Spartan King and his retinue went for a little Hoplidromos and charged the Athenians on the little hill! Whil I just advanced but kept my distance to the outnumbering Athenians. In fact both parties had the similar tactic, to block on flank, while the other should advance and outflank and roll up the other. You know what happens with plans!

Barts attack was soon quickly surrounded by more Athenians than he could think of and very early in the game Brasidas and his bodyguard got slaughtered! It looked like a walk over for the Athenians.
On my side my rabble was just tethering before the other rabble, avoiding clashes at all costs.

Soon in the centre something changed. The Athenians learned that the Spartan hydra had more heads than they wished for. On after the other Athenian hoplites were melting away before the last Spartan mora, while I kept (more or less because Alisdairs bad control dicing) the other flank away.

In the end many men and units were destroyed, both sides lost a lot and all cohesion to form anything formation wise let alone a charge, we called it a day. The Spartan king was dead and probably all Athenians would have retreated behind the city walls of Amphipolis, still in the hands of the Delian Empire – so we delared it an Athenian victory, but just about it, as the Spartans had give a good show for their money, but they lost a king ... 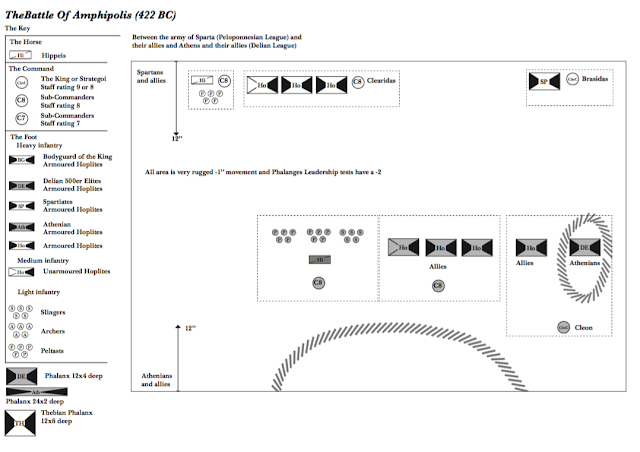