We decided to have a little AWI bash, Black Powder style, to get people into a campaign mood - (I have to e-mail the stats, cause nobody can be bothered with a concise army organisation, but to this in another post).

Angus stepped in for the Brits and Bart tried out the Rebels, and I played the Hessians goal was to destroy the enemy. The militia was extra hardcore (nobody diced for wavering!!!). The rebels had an engineering unit and could have built an additional 12" of fortifications, but they failed to keep the Brits away long enough.

The Americans had the start and fanned out to both flanks and reaching for the stonewall of the farm. Then the British advanced and the Hessian dashed prematurely into the American right flank. A fierce fire fight and some bloody melee took place, taking both side 2 line units, but the Americans could afford the losses.

On the British right Angus was shooting what the barrels could hold and also killed native scouts as well as Rebel riflemen. He actually took the Farm in the centre of the battlefield, so we had some good position.

But all unravelled, as Bart's American Sniper 6-pounder battery had the chance to wither down my Hessian flank unpunished - The Hessians were dissolving. Angus sent me the 17th Dragons to somehow stabilise it but that was too late I guess (so of course it was all his fault, even though the British rapport will probably blame the Germans - how unfair!!!).

The last British Grenadier Bayonet charge pretty much hit Bart's left flank quite hard, but then we had to pack up. Unit score-wise it was for the Brits 4:2, but in the long run the Rebels could have rolled up the Hessian flank and withered down the British with their cowardly fire. So we agreed on a draw with a tactical victory for the Americans. It shows what can happen, if you let the rebels shoot at you for too long AND if your charging too early. 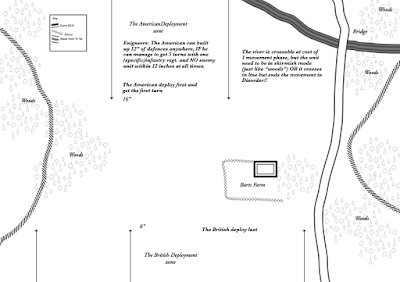